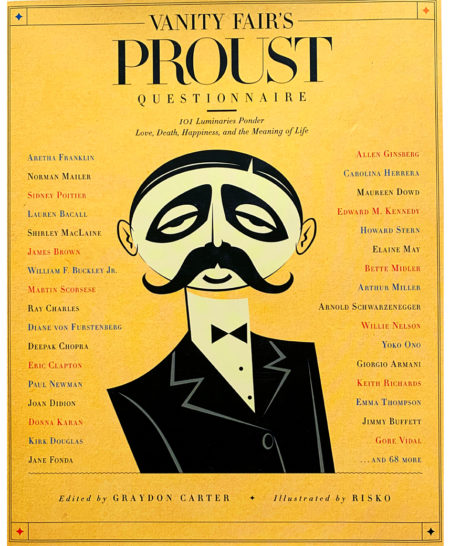 101 Luminaries Ponder Love, Death, Happiness, and the Meaning of Life

The Proust Questionnaire is a set of questions answered by Marcel Proust, the French essayist and novelist, who believed that an individual’s answers reveal his true nature, and often used by modern interviewers.

Proust answered the questionnaire in a confession album–a form of popular parlor game played by guests in high society gatherings—much like Truth or Dare! The album belonged to his friend Antoinette, daughter of future French President Félix Faure, titled “An Album to Record Thoughts, Feelings, etc.”

A similar questionnaire is regularly seen on the back page of Vanity Fair magazine, answered by various celebrities. In October 2009, Vanity Fair launched an interactive version of the questionnaire, that compares individual answers to those of various luminaries – an intimate look into the inner lives of our most prominent cultural figures such as Jane Goodall, Allen Ginsberg, Hedy Lamarr, Gore Vidal, Julia Child, and Joan Didion.

The probing set of questions originated as a 19th-century parlor game popularized by contemporaries of Marcel Proust. Illustrated by Risko, Vanity Fair’s Proust Questionnaire Edited by Graydon Carter and Illustrated by Risko, brings together the responses of 101 of the most vibrant personalities of our time.

David Bowie’s answers to the question: “What do you regard as the lowest depth of misery?” was “Living in fear.”

Playboy founder Hugh Hefner wrote the depth of misery is “unrequited love,” while comedian Conan O’Brien responded the quality he likes best in a woman is “a lust for mediocrity.”

Actor Dennis Hopper wrote he’d like to die with his boots on, then reported his motto is, “Never wear boots.”

The answers, collected in a book, are fascinating, revealing, candid, hilarious, and endlessly fascinating.

The Orenda Social Club is offering great solutions for you to make new friends, grow your social connections, and find love with no pressure by using social profiles based on the Marcel Proust Questionnaire. Once you create a confidential profile and become a member, you will be added to the list of social events where you can meet other members in person.

This questionnaire is one of the best-known interviews used in the media today. It is thoughtful, fun, concise, and does a good job showcasing someone’s personality.

For those who would like to take a chance at the questionnaire,  fill out a form and compare the answers.

It’s a great way to get to know yourself and others. Have fun!